The Vedute of Prague 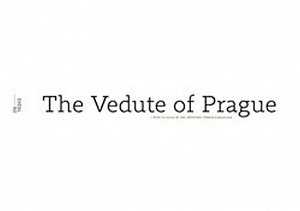 "Book "The Vedute of Prague" describes the development of Prague cityscape in the period of last 5 centuries and emphasizes future possible scenarios how the city composition could be continuously developed in the 21st century," comments the content of the book Roman Koucký, the co-author of the book and the chief of the Metropolitan plan office, that prepares new urban plan of Prague, called Metropolitan plan.
The overall visual composition of the city forms a significant part of its identity and the collective mental "city image”. The layered and diverse composition of the city "from medieval times up to now” is, as emphasized in the book's first chapter, the reason for Prague's inscription in the prestigious UNESCO Register of World Cultural Heritage. The second chapter describes how it is not only possible but indeed necessary to read the contemporary city/metropolis, and what to emphasis in supplementing its composition. The third chapter is a brief history of the formulation of Prague's historic urban landscape, particularly in the turbulent 20th century, and an outline of a possible solution for its further development based on the Metropolitan Plan. It describes how it is possible to supplement the historically layered city with a contemporary cultural layer precisely as assumed in the wording of the UNESCO inscription from 1992.

The attempt of the book is to place today's views of the city into a historical context. For this reason, in the first excursus, the book provides a selection of historic Prague vedute from the collection of the City of Prague Museum.
In the second excursus, the book presents selection from the archival collections of IPR Praha with views of the design of the city from the 20th century.
The main part of the book represents in the 3rd excursus series of new Prague vedute: the panoramic photographs taken from 2014 to 2017 as the artistic vision of Ester Havlová, capturing of a crucial historical moment in the search for a vision of the future of Prague.
The final, fourth excursus is a description of the entirely new depiction of the proposed future composition of the city, the ‘digital veduta' using orthogonal imaging, used aswell in the Metropolitan plan of Prague proposal.

For the text and illustrations, the materials used are results of research by the Office of the Metropolitan Plan, published in full in the volume Metropolitní plán, koncept odůvodnění 2014, supplemented by an extensive new research including methodological principles of defining the height composition of the city.